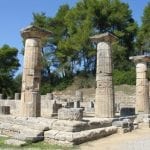 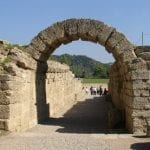 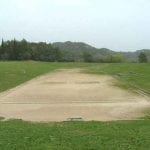 The first games were held in the second millennium B.C. and had local character. In 776 B.C the first Pahnellenic games were organized in Olympia. During the games all the wars between the Greek cities had to stop. Some of the important building are: The temple of Zeus, a work in Doric structure made from local shell-limestone and covered with white stucco. Metopes and pediments made from marble.

Temple of Hera, a Doric Temple,

The Philippeion, a circular marble structure with lonic columns and conical roof.

The palestra, where athletes were using for boxing, and wrestling.

The buildings were the athletes used to train,

The workshop of Phidias who curved the Ivory
The Stadium 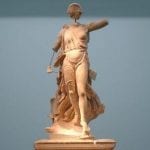 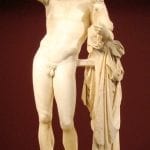 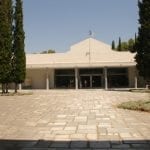 (Tuesday – Sunday) 08:00 – 15:00,
(Mondays: 10:00 – 15:00)Distance: 350 meters from Hotel – 5 min. walk.
It houses:
the most unbelievable sculptures, such as the extensive collection of bronze votive offerings from the classical Period the richest of its kind in the world. Also the sculpted decoration of the temple of Zeus, one of the Seven Wonders of the Ancient World. The statue of Nike by Paionios and naturally Hermes of Praxiteles. The hosting of the 2004 Olympic games gave the opportunity to restore works in the museum and upgrade and improve the surrounding area.

Museum of the History of the Ancient Olympic Games. 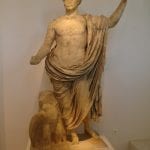 Museum of the History of the Ancient Olympic Games.

As of 2004, it hosts exhibits demonstrating the glorious history of the Olympic games. The collection has been organized by topic and covers the first games through their acme.

It houses the history of sports through the display of works from Minoan and Mycenaean Greece.

is the presentation of the beginning of the games and Hercules.

is about the preparation of the athletes in illustrated red figure vases featuring scenes from Palaistra and the Gymnasium. Room 8 is dedicated to the awards and the offerings. 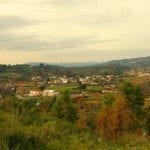 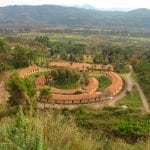 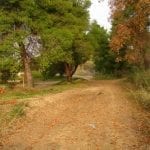 This footpath  follows the Kladeos river and is easy to walk. It is fully signposted by the Naturalist association of Olympia. The walking time is about one hour and there are signs to guide the walker.

The route has two starting points:

The first starts from a road close to the Intermediate School of Olympia and the second starts from the entry of the Archaeological museum. The end is at the Alfeios river. Hikers will walk in a beautiful and calmness environment and can relax at the picnic tables close the Roman wall. 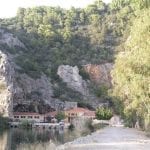 Kaiafas Spa is located at the foot of mountain Lapitha. The springs of Kaiafa were the first to be organized by the Greek authorities because of the proven healing power of the waters. Insides the caves there is a strong hydrogen sulphide smell that emerges as bubbles from the bottom of the caves in the hot water. The temperature of the inside pool water is between 32 C and 34 C . 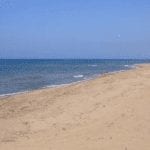 A beautiful small village in the western part of Peloponnese. A visitor can enjoy the sandy beach and and fresh fish dishes offered in the local taverns. The village is 400 meters far and offers shopping facilities. 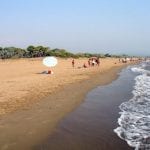 Kato Samiko is a small village south of Pyrgos city. Kato Samiko beach belongs to the coastline of Ilia, Pelopenesse. It is an organized beach with golden sand and blue waters. Sporting events are often in this area, such as  beach volleyball tournament. Visitors are able to lie on the sunbeds and enjoy delicious snacks. Other  facilities are umbrellas, showers and two cafe bars. 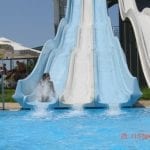 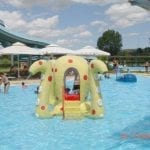 Distance from Olympia center 2,5 kms. It is situated in the entry of Olympia  as you are coming from Pyrgos. After your visit in Archaeological site and museums of Olympia, bring the whole family and enjoy a refreshing day of fun in the sun at Olympia Splash Waterpark. There are four water slides and a Clildren’s water playground. The park has a large car parking area, free of charge as well as Toilets, Showers and Telephone. In the pool bar you will find cold refreshments. 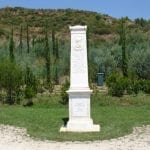 He was the founder of the International Olympic Committee. He was born in January 1st, 1863 in Paris. From an early age had interest for literature and history, as well as in educational and social issues. He is considered father of the modern Olympic games, beginning with the summer Olympics in Athens.

The Games have been held every four years in different cities of the world. Since 1936 the Olympic Flame has been carried from Olympia to the Games as a symbol of peace and friendship. Pier de Coubertin was buried in Lausanne, but in accordance with his will, his heart was buried separately in a monument near the ruins of ancient Olympia. This monument is 300 meters far from the stadium and near the International Olympic Academy.

x
Login in or create account
Or
Call Now Button